Between the Ropes  /  Chapter 1 Sharpshooter: Gage and Isis  | 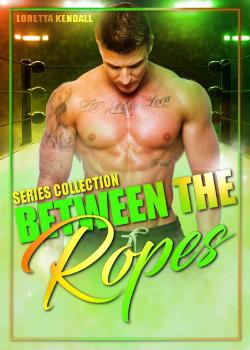 A series collection of the original Between the Ropes Series.

“Girl, you need to get out of Tennessee and come work for IWX. I talked with my boss Davis, and he thinks you would be a great asset here. Besides, your mom has been telling me you’re sick of the indies. International Wrestling Xtream is the hottest company going right now. We need you, and Wraith agrees with me.”

Cyrus adjusted his cell phone while trying his best to convince his cousin, Isis, that she was ready for the big leagues. He and his brother had been working to get her out of her shell for years. The opportunity before her was a dream job in the making, and they both knew it. The shy girl would just need a little coaxing if he were to put the plan into action.

“Yeah, thanks for pushing your big brother Wraith on me. He called yesterday, trying to convince me to go on the road with you, too. Cyrus, I know you’re just trying to help. I want to be there too, but I’m not as good as you are. Call your sister, Holly. She’s more of a badass than I am. She fits right in with the Doom style. My image is just not the same. You guys are total badasses with a scary horror movie, meets biker rally vibe. I can’t pull that off. I’m a girly-girl. Wraith thinks Mr. Preston would figure something out for me. But I wanted to be with you. I’m worried that I won’t be good enough on my own,” Isis Evans confessed.

“Ice Queen, you're amazing, and you know it. The other wrestling companies have been beating down your door because they know you’re the best new female wrestler out there right now. I know the Tyson brothers called to get you to go to Wrestle Masters. You need to be with a real company like IWX, not with those pretend superhero dorks and their flashy flip-flopping moves.”

“Hey, the Arch Rivals are my favorite tag team, next to you and Wraith. They are not superheroes. You just don’t get into the high-flying stuff they do.”

“It’s dangerous and causes too many risks for injuries to happen.”

“It’s not my fault they quit IWX and made their own company. You just don’t like them because they left and you’re loyal to the core.”

“Whatever. They’re losers. You need to jump while the fire is hot. Mr. Preston won’t give you a second chance. I talked to him about what he has in mind for your character. Wraith likes the idea and so do I. We believe this angle would be perfect for you. You look like some rich diva and will be great for the storyline he’s planning. You’d love it,” Cyrus said, trying to not give away too much information.

He didn’t want to give her more details than she needed right now. He knew how easily Isis became spooked if he gave her all the details upfront. As talented as Isis was, she was equally paranoid and skittish.

“Did you say, diva? Diva! You know that word pisses me off. You always act like I’m so prissy and vapid. I’m not, you know. I just use the glam st

age persona to wear cool clothes and feel like anyone other than myself.”

Isis knew that was true. She was self-conscious and shy in real life. On stage, she was a different person entirely. When she was in the stage persona, Isis, the Queen of Goddesses, she was a fiery glamazon, oozing with confidence.

Cyrus sighed with regret, saying, “Sorry. I don’t think you’re vapid, little one. I don’t get why you’re so hard on yourself. Listen, you have no choice because I told Davis you would be there next week to sign the contract. I am sticking my neck out for you to get this opportunity. I’m not letting you back out this time. Listen, I got to go. The stagehand just said it’s time to go to the ring.”

Cyrus hung up the phone with a sly grin. He knew Isis was probably having a nervous breakdown once he hung up on her. He loved taunting his favorite cousin; his secret, guilty pleasure that only he could do. He wouldn’t allow anyone else to torment her. The brothers, and their sister Holly, had become Isis’s protectors since they were kids.

“Cyrus Michael Evans! Damn it! You Jackass!” Isis slammed the phone down on the couch. “I can’t believe he would do this to me. Wait... What angle? Does that jerk know something he’s not telling me? He’s probably setting me up with some wrestler buddy he thinks I will fall head over heels for. He’s always trying to set me up with his friends. Cy just does it so he can check up on me. Big Cyrus the Crusher is a big pain in my ass,” she argued with the empty room.

After pacing the floor for a good five minutes, ranting to only her calico cat, Cello, Isis fell back on the couch. She watched as her favorite wrestler Gage Stone entered the ring with her cousin, with a cocky swagger to his step.

Isis always found Gage attractive. She had even found herself jealous when he started dating his now ex-wife, Summer Haze. Summer was a backstage reporter, notorious for sleeping her way through the IWX male roster and manipulating people to get her way. She had gotten her job by sleeping with the IWX owner’s brother years before. The thought of Summer made Isis’s skin crawl. She had heard the stories for Summer’s backstage antics, and it was nauseating. Thankfully, the woman’s days on the show came to a bitter end because of her backstage politics.

Only her cousin Wraith knew of Isis’ little crush, and she intended to keep it that way for as long as she could. He found out by default when she got upset with him for supporting the initial union of Gage and Summer. She didn’t talk to her oldest cousin for weeks, as the jealousy took over.

Sitting thinking about the possibilities of the opportunity Cyris presented her with, she couldn't deny it was exciting, regardless of how nervous it made her. Maybe this chance at meeting Gage in person could give her the courage she needed to tell him how she felt once and for all.