The Substitute Wife: My Poor Husband Is A Billionaire  /  Chapter 1 Cheating On Her  | 0.10%
Download App
Reading History 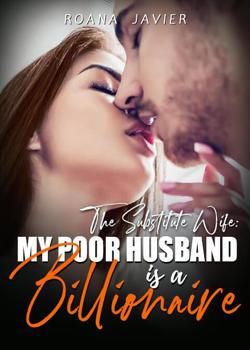 "I have given myself to you. Why don't you break up with Janet?" the woman asked in a seductive, breathless voice. She was half-naked and hovering above a man.

"Don't mention her name when we are making out." The man was so excited that he squeezed the woman's breasts and moaned in pleasure.

The woman seemed dissatisfied as she didn't get the answer she wanted. "No way! She is an adopted daughter -- even our dog holds a more important position in our family than she does. What's so good about her?"

The man didn't say anything. He gripped the woman's waist and thrust harder, which made her scream and moan his name.

Janet Lind stood in front of the door, listening to everything in the room. Her tired eyes turned cold as she understood what was going on.

She had just returned from the hospital.

Hannah, who had raised Janet ever since she was a child, was diagnosed with advanced liver cirrhosis three months ago. The woman needed a liver transplant right away. Janet had to gather the money to pay the medical expenses.

To make her situation worse, her younger sister hooked up with her boyfriend. Janet felt her life was falling apart.

"Did you hear me? You have to tell me your decision tonight. It's either her or me. The choice is yours." Jocelyn Lind pounded on Steve Carter's chest, desperate to hear his answer.

Janet kicked the door open and glared at the couple. "Let me save you the trouble. He is just a man. You can have him if you want."

Although Janet sounded nonchalant, her heart broke to watch her boyfriend cheat on her with her sister.

Steve was Janet's college classmate. He was a handsome man from a wealthy family. He had chased after Janet for three years.

He had confessed his love to her again right before their graduation.

It was on the playground of their college. Many people were around, and almost all the students had witnessed the romantic scene. The crowd cheered, and Janet finally agreed to be his girlfriend.

The pain of betrayal crushed her. Looking at the two people in front of her, Janet clenched her fists, her nails sinking into her flesh.

Steve hurriedly pushed Jocelyn away, put on his pants, and got out of the bed.

She had put a lot of effort into hooking up with a wealthy, handsome man like Steve.

Janet had won his heart without doing anything, which infuriated Jocelyn.

After all, Janet was just an adoptive daughter.

"What the hell are you saying? You sound like you dumped Steve. It's Steve who dumped you, bitch!" Jocelyn sneered as she pulled the quilt closer to her body. Then, she looked at Steve and asked, "Steve, what did you say to me just now? Tell that to Janet!"

Steve had slept with Jocelyn purely out of impulse. The woman had seduced him, and he lost control of himself.

He kneeled and grabbed Janet's wrist. "Janet, please forgive me. I didn't know what I was thinking."

Although tears filled her eyes, Janet looked at him with disgust. Once Janet set her mind to something, no one could change it.

She withdrew her hand from Steve's hold. "I'm sorry, Steve. I don't want anything that's tainted by Jocelyn. You two are a perfect match. Let's break up."

Jocelyn was taken aback. Steve was on the verge of a breakdown, but there was not even a trace of sadness on Janet's face. Anger surged through her veins because she didn't achieve what she had wanted.

Janet didn't have the time to talk to them. Jocelyn had always been competing with her ever since they were kids and she enjoyed taking away whatever belonged to Janet. She used to snatch Janet's toys. Now that they had grown up, she snatched her boyfriend as well.

Janet was used to it. She was only worried about Hannah's medical expenses now.

Just as she was about to leave, she heard the clacking of footsteps from the corridor.

"It's late at night. What's with all the noise?"

Bernie walked into the room first. His eyes widened in horror when he saw his daughter sitting on the bed wearing nothing -- except for the quilt wrapped around her. "What the hell are you doing? You are going to get married soon. What are you doing with another man?" he bellowed.

Jocelyn hugged herself and looked at Bernie with bloodshot eyes. She gritted her teeth to suppress her rage.

The Lester family and the Lind family had an agreement to get their kids married when they grew up. Her fiance was an illegitimate child, and the Lester family had driven him out of the house a long time ago. He was poor and didn't even have a decent job. He was just an idler who wasted his time doing nothing. Jocelyn didn't want to marry him.

She felt she deserved someone better than him.

"I'm pregnant!" Jocelyn said, pointing at Steve. "I am pregnant with his child. So I can't marry anyone else. You better cancel the wedding."

Steve was dumbfounded. He had slept with Jocelyn only a few times. How could she get pregnant?

"What nonsense! You must marry into the Lester family!" Bernie was fuming with rage. He wanted to slap Jocelyn for acting stupid.

After all, the wedding was a matter of his prestige. What could he tell the Lester family if they asked the reason for calling off the wedding?

Fiona protectively stood in front of her daughter. She was protective of Jocelyn and seldom scolded her. Her husband was seething mad, and she couldn't watch him shout at Jocelyn.

"Bernie, why are you mad at Jocelyn?" Fiona cried. "Janet is also a daughter of the Lind family. She can also marry into the Lester family."

Bernie and Fiona didn't have any child for the first few years after they got married. Due to the pressure of the elders of the Lind family, they had to adopt Janet. Years later, Fiona finally got pregnant and gave birth to Jocelyn.

The whole thing only made her hate Janet even more. Janet's existence was proof of her infertility. The mere sight of her adopted daughter irked Fiona.

After giving birth to Jocelyn, Fiona became partial toward her daughter and despised Janet.

Later, as time went by, Janet grew up to be a better woman than her daughter in every aspect. That seemed to intensify her hatred for Janet even more.

Fiona's words enraged Janet. "You had agreed to get Jocelyn married into the Lester family, not me," she roared. "Why are you planning to get me married just because your sweet daughter has been banging someone?"

"We have raised you all these years. It's time for you to repay our kindness, Janet," Fiona said in a low voice, her eyes twinkling with cunningness. "Don't you want that maid to have the surgery? We will pay for the medical expenses as long as you marry into the Lester family in place of Jocelyn."

A complacent smile emerged on Jocelyn's face. She felt Janet and the illegitimate son of the Lester family would be perfect for each other.

Janet gritted her teeth as Fiona's words infuriated her. However, the doctor's words flashed in her mind. Hannah didn't have much time left.

Janet had just graduated and couldn't afford to pay for Hannah's treatment.

Although Bernie and Fiona adopted Janet, they never really cared about her. Hannah, the maid of the Lind family, raised Janet. Hannah was like the grandmother Janet never had. She couldn't leave her alone.

Noticing her hesitation, Fiona walked up to Janet. "You will have to marry someone in the future. Why don't you help us by marrying the son of the Lester family? I will give you the money as soon as you get married."

Janet's feet trembled as everyone in the room stared at her. She needed money to pay Hannah's medical fee.

Tears finally streamed down her cheeks. She lowered her head and replied in a low voice. "Okay, I'll marry him."