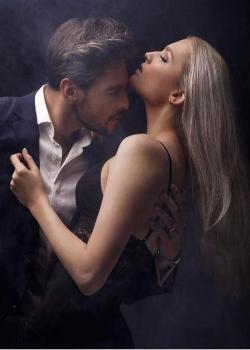 Night stood still in Athens as darkness covered the sky, in a beautiful Mansion, an average man and a woman bid farewell to their little boy and boarded a plane.

Escorted back home by his Butler Geoffrey, Little Robert was met with the sudden news of the death of his parents through a plane crash.

He locked himself up in his room and cried his heart out refusing to eat or talk to anybody.

"Sir Robert, you have to eat something" Geoffrey said standing by the door, he had been there for thrity minutes holding a tray of food,

"I don't want to, I want my parents back" Robert screamed at the top of his lungs,

"I will leave this here for you Sir" Geoffrey dropped the tray on the floor, he felt sad for his young master, but didn't know how to comfort him.

Robert curled up in a corner crying, he had not expected his happiness would end just like that, his parents were the warmest people he could ever know, why did they have to go so soon.

A knock came on his window and a tiny little girl of seven years old crept into his room,

"Suzy, you shouldn't be here" he panicked, he didn't want her father to scold her for sneaking out of the house.

"Am I not allowed to see my friend" Suzy looked bluntly at him,

"You are, but what if your dad catches you" he expressed his concerns as he looked at her dirty and greasy hair,

"Here, I brought this for you" She pulled out an apple from her pocket and gave it to him.

"Thank you" he took a big bite and shared it with her, he had initially forgotten that he was hungry.

"I heard what happened from Mommy, she said that your parents flew to heaven and that they would be safe there" She sat on his giant bed moving her legs.

"Yes" he didn't have the heart to tell her that his parents where dead and would never come back again.

Sitting beside her, he felt comfortable and his sobs stopped,

"Robert" she called blinking her big beautiful eyes at him,

"I am leaving" she said

"Okay, I will escort you home" he replied oblivious of what she meant.

"No, I am leaving Athens tomorrow" she said interrupting him

His mood dampened, she jumped down from his big bed and hugged him.

That night Robert slept heavily because of his crying and forgot that he had promised to see Suzy before she left, he looked at his alarm which showed 6:59, he was late, she was leaving in a minute and he was prepared. He sprung to his feet and ran outside but it was too late for him, Her parents car were already a distance away, he sighed heavily and returned back to the house.

"Young Master, Breakfast is ready" Geoffrey said noticing that he was out of his room and hadn't done eaten anything since yesterday.

"Good morning Sir" A lady bowed to him,

"Alexia, how is my schedule like" Robert asked his petite secretary,

"Not too busy Sir, you have a meeting with Mr Dan in the next one hour and he relayed that he would also be entertaining another guest along with you" she reported.

Robert nodded and entered into his spacious office, it had been twenty years since he took over his parents company and growing it to what it was today. He was not only the richest businessman in Athens but also the most sought after businessman.

"Good Morning Mr Dan" he gave him a warm handshake and took his seat completely ignoring the lady seated opposite him.

"By my left, this is Miss Camella" Dan introduced her but Robert didn't care.

There was an awkward silence in the room until Dan spoke out.

"You both are here for the same deal, why don't Robert start first" he said.

"From what we discussed earlier, I would be offering you 10% of the profits" Robert began, stating his deal.

"I will offer you 20%" Camilla cut in receiving a cold glare from Robert.

"Wow, 20% that is a lot" Dan complimented. Camilla was striking a better deal than Robert and he was persuaded,

"30%" Camilla cut in yet again, she smirked at Robert waiting for his reaction.

"Robert will you love to bring yours down" Dan turned to him.

"No" he shaked his head, 30% meant that she would earn a little because of the expenses of marketing, such deals looked ridiculous to him.

"Congratulations Camilla, you have won the contract, you can send the document to my table later" Dan stated and left them.

"Who the hell do you think you are" Robert threatened,

"All is fair in Business and War, No hard feelings Robert" She picked up her bag and escorted herself out.

"Damn it" Robert cursed as he entered his office,

"What's wrong" Lyon his best friend asked while watching him curse and lament.

"That stupid Camilla took away a major deal that I worked hard for" He complained throwing his files to the floor.

"You have met Camilla, they say she is bloody when it comes to business, how do you think she is that successful" Lyon reasoned with him.

Camilla was one of the leading business women in Athens, strong and passionate about her work, most people judged her for not being married because she was too eager to be successful.

"I will deal with her" Robert thought hard on how he would make her pay for crossing him.

"Let me handle it" Lyon said,

Robert understood clearly what he meant, Lyon wasn't just his bestfriend, he was his assassin, so if Lyon said he would handle it then Camilla would be dead very soon.