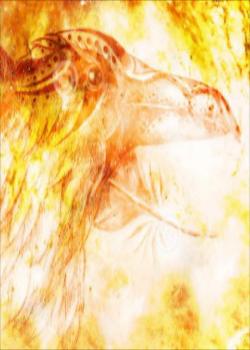 "You have cursed yourself for this love, princess of Vahejul.

I found myself kneeling on a huge stone slab, imprisoned in a dark and cold world, totally powerless in front of the powerful shot nimbled with blinding light bursting from the black bodies of my enemies. And heading towards me at a frightening speed, I lived these unreal moments as the last burden of my life. And yet, finally accepting that I had lost him and realizing this end, he came back to life to save me. I knew at that moment that never again would I have to worry or forget, for my heart had finally achieved what it most desired, forever.

There was a time when I asked myself that question every day. And as far back as my memory goes, whether in naive childhood or in rebellious adolescence, I had imagined it as it should be, as every extraordinary tale and story told and lived by others, dazzling the soul, should be. A dream, a breath, a feeling of a blinding and marvelous brightness. The mystery of life itself. What a fantasy and naivety to have imagined it only like that. There was only innocence and light in that blessed time. And then one day, one inexorable and real day I met him, and everything had to change.

The most terrible thing was without a doubt, the price I understood I had to pay to be able to live it. And so I realized that it was the reason that made this feeling the cause of the greatest tragedies in the world.

For me, who was also destined to know it, it was a heartbreak and an endless upheaval.

One day I had met on my way a lonely and terrible being, whose duty was to save a whole world, and this, clearly in spite of himself. Even if it was only for this act, he succeeded in possessing my one and only heart forever, and dragged me mercilessly into the depth and breadth of his fury.

Afraid of the strength and unpredictable nature of this person that everything condemned, I was wrong to have tried to push him away, even if it was with immense despair.

And because of that, I almost lost the greatest and most beautiful thing that life had ever to offer me.

But perhaps the worst thing was this person's singular and implacable way of responding to my rejection. Simply by a total absence. It was so awful that my tears almost dried up. And deep down, I already knew what I had to endure to find him. A suffering so great that once in my madness, I chose to forget him.

However, and I knew as much as he did without question, that although with a single chance, a single and infinitesimal chance among the countless stars lighting up the eternal sky that one day he revealed to me through his eyes, I would have seized him with all that I would have been, for better or for worse, to be able to live, if only for a moment, our love.

I saw myself as I

was, an ignorant young girl, terribly tired and stubborn, looking for the answer to a futile question that had no reason to be. At that distant time, when I was hurt by my failure because I could not touch the heart of my love, I went into bitterness and melancholy. I rejected the understanding of others, whatever it might have been, and despised any consolation, because it made me feel even more miserable.

And life, in its great malice, decided to reveal the truth to me by plunging me into a horrible and infinitely painful adventure where I met on my way extraordinary beings, anchored in their ideals as only few people can be, and using their fantastic and sovereign magic in order to live their passion to the limit, and thus prove to the world as well as to themselves the greatness of their convictions.

And one person in particular has done this more than any other. A being, dark and cold that I met for the first time during a bloody and incomprehensible twilight, during which a foul thing had wanted to devour my life. For myself, who my entire existence has shunned trouble, especially from strangers, I never imagined that I would possess such lust, and the nature of true darkness. But if it was for this person and this person alone, then I was ready to accept it for better or for worse.

Loving him as I did, I sincerely believed I was doing the right thing by tirelessly trying to protect and reach him in the rather unimaginable goal of sparing him the pain of his destiny. However, when I came face to face with his inner self, I had to admit that I would never really succeed. For what I had accomplished could in no way compare to the magnitude of the sacrifices he had to make all his life in order to remain what he had promised to be, going against his whole dark and bloody nature to have the strength to achieve what others so desired. And the moment I had accepted this fact, and what it was, I felt free from the chains of ineptitude, and I finally lived.

As I said, it all started during a glowing twilight and the end seemed inevitable. As I fled from the house, filled with rage, fearing to be punished for a fault that I nevertheless voluntarily committed, I came to a place where horror and beauty were mixed with indifference, and which had led me in the discovery of many things, those things that have been for a long time foreign to me. In this indescribable danger, I acquired the inexhaustible strength to fight and to live. And also suddenly he came to me and saved me.

It was a moment of destiny of unparalleled beauty. Every moment was unforgettable, his look, his body filled with the most unmentionable, tragic nights, everything had to remain. Unalterable, indelible. Of all that he was and will always be for his people and for me.