The Substitute Bride: Making Memories Of Us  /  Chapter 1 She Was Just A Substitute  | 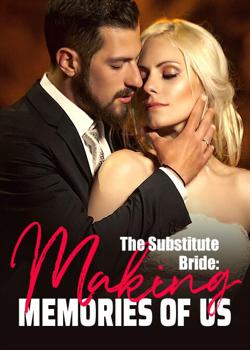 It was a night of autumn, and the night sky was filled with clouds, almost covering the moon.

Tonight was a busy night for the Hyatt Hotel, which was the most luxurious, six star hotel in the city Antawood. The worldwide famous businessman, Brian Clark had booked the whole hotel for tonight.

Brian, in his black suit, sat in a luxurious room, with a cigarette between his slender, long fingers. The smoke curling up from the burning cigarette had created a mysterious aura around him.

"Brian, we all had a good time tonight. But it's late now," the man next to him exclaimed. He had dark skin, thick eyebrows and big eyes.

"I've heard that Miss Woodsen is a social butterfly. She's well known for sleeping with a lot of men. Are you sure about this?" Someone else added.

From the tone of their voices, you could tell that they had their doubts about this marriage. However, since Brian had made his decision, there's nothing much others can do.

Some discussions can only happen after consumption of alcohol.

"Clayton Woodsen owes me a huge amount of money. Giving me his precious daughter is not going to cut it," Brian Clark said matter-of-factly.

"Are you saying that Clayton Woodsen trying to buy time? How much does he think his daughter is worth?" This time it was Jaime Turner, Brian's right hand man who spoke.

Brian still wore his usual stony expression. Taking a drag of his cigarette, he said, "Keep a close eye on Clayton Woodsen. I will make his life a living hell!"

"Is that what you're going to do to your bride tonight as well?" The person who asked this had a sly smirk on his face. "Or... have you other plans for her?" He had only heard of the beloved daughter of the Woodsen family, but never had the chance of meeting her. In fact, there were very few people who had seen her before.

"I've heard that she's a beauty. She has the curves that all men desires. She might be a tough one."

The men sitting around the sofa participated in the conversation actively about the bride who was yet to show up.

However, the woman standing beside Brian had a bitter expression on her face. She obviously hated the woman they were talking about.

"Enough!" when she couldn't stand it anymore, she blurted.

"Oh! Miss Anna is angry." It was so obvious to everyone who had discerning eyes that Anna, who had been following Brian her whole life, had a special place for him in her heart.

The relationship between the two of them was ambiguous. She had failed to become Mrs. Clark, which was all because of a woman named Arlene Woodsen. To Anna, Arlene didn't even deserve Brian.

"Angry?" Brian put out his cigarette and glanced at her. Though very subtle, a faint smile appeared on his lips.

"Brian," Anna called out his n

ame and said nothing else. She knew her place. No matter how close she had been to him, she would have to stick to her duties and would never cross the line between them.

"Brian, why don't you introduce your new bride to us?" a follower of Brian asked with others agreeing.

Brian raised his glass gracefully and gulped down the drink in one go. Putting down the glass on the table, he nodded his approval.

Meanwhile, Ayla Woodsen was waiting anxiously in a deluxe presidential suite. She was wearing a luxurious wedding dress specially customized in Paris with delicate makeup. Today was her wedding day, but there were no relatives present. She just signed her name on a piece of paper and sold the rest of her life to a man that she had never met.

Despite her unwillingness, for the sake of her father and to support her family, she became the substitute for the so called "sister" she had and had to marry a devil named Brian Clark.

She was squatting in the corner of the room, trembling. She was only twenty-two years old. Her life had only just begun. But now she was forced married to a man six years older than her. Though the room was luxurious and brightly lit, she was still scared.

She was terrified, but had no choice.

She had not eaten anything since yesterday, and now she was very dizzy. There was no food in the room except for the wine bottles and glasses on the table. She had never drank alcohol in her life and she had always been her teachers' favorite student.

She knew that since the moment she promised to be the substitute, her old life was behind her and her future was filled with uncertainties.

Her stomach growled. She was starving. Her glossy lips were drying out. She bit on her lower lip trying to keep herself concious. She had been waiting for the man that everyone called a devil to show up.

The door opened suddenly and two strangers entered. Both men were rough looking and neither of them was Brian.

"Mrs. Clark, Mr. Clark wants to see you," one of them spoke coarsely, rather disrespectfully.

"Where is he?" Ayla stuttered and scooted back like a frightened little bunny.

The two men didn't answer. Instead, they pulled her up rudely and dragged her out of the room.

She resisted and struggled to free herself, but all went in vain.

"Ouch!" Before Ayla knew what was going on, she was thrown hastily to the ground. Even though the ground was covered with carpet, she was still badly hurt.

"Arlene, look at me!" Brian spoke with a steady but domineering tone.

She didn't dare raise her head to look at Brian. If he realized that she was just a substitute then her life would be in grave danger!