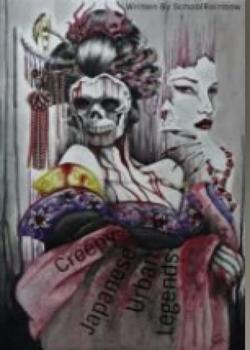 This legend is about a very famous spirit in Japan， known as Kuchisake-onna. Although she may seem pretty at first， looks can be quite deceiving.

Kuchisake-onna is a woman with a slit mouth that is said to walk around at night， wearing a surgical mask. Legend has it she was mutilated by her husband， and has now returned as a malicious spirit， out to cause havoc and chaos. This caused so much panic in Japan that there were even reports of schools allowing kids to go home only in groups， with teachers escorting them for safety.

There are some other origin stories that people have theorized， although they are far less popular. One of them is that she was once a former patient of a mental asylum， and that she slit her mouth open due to insanity. There is also the one where she was the wife of a samurai， and when he found out she was cheating on him， he cut her mouth from ear to ear and asked， "Who will think you are beautiful now?"

In the legend， if someone sees her， the woman will ask a potential victim "Am I pretty?" If they answer no， she will pull out a pair of scissors in her pocket and

stab them viciously until they are dead. If they answer yes， she will pull away the mask， revealing her slit mouth. Then， she will ask， "How about now?"

If they answer no， she will cut her unfortunate victim in half. If the person answers yes， then she will slit his/her mouth so it resembles her own scarred mouth. It is impossible to run away from her， as she will simply reappear in front of the victim.

Even though it seems like every answer leads to death， there have been rumors that there are ways to escape. Some sources say she can be confused by the victim by answering her question with odd answers， such as "You are average" or "So-so". Another method is to flip her questions towards her， such as asking her "Do you think I“m pretty?" Unsure of what to do， she will ponder the reply for a couple seconds. It gives the person just enough time to escape while she is lost in thought. In some variations of the tale， she can be distracted by things like fruit or candy thrown at her， which she will then pick up， thus giving the victim a chance to run.

The most easiest escape route， however， is to tell her that they have somewhere to be; she will pardon her manners and excuse herself.

This is probably not true， due to the fact that there aren“t any accounts of seeing her with enough evidence. But， either way， you may as well be polite to everyone- even if their face is cut open.