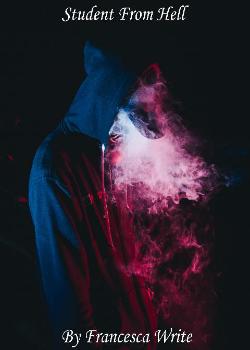 Cassius is a 27 years old English teacher that runs from his past, more exactly, from his ex, who turned out to be a cruel psychopath, and he's forced to change schools every 6 months so his tormentor wouldn't find him. Adam is a high school student but looks older than he is, covered in tattoos, wears leather, and rides a sports motorcycle. At the same time, he is a drug lord named Black because he doesn't express any emotions whatsoever and doesn't hesitate to deal with any situation. He is the epitome of a bad boy and manwhore, a gorgeous fallen angel that Cassius ends up calling Satan because he wouldn't tell him his name. Well, he would, but only with a condition that Cassius can't honor. "Your name again?" I ask, just in case, but I don't think I'll get an answer after the look on his face. "I'll tell you when you'll be ready to scream it when I'll be buried deep inside of you. Until then...it's pointless." As I said, I didn't expect him to tell me but damn, I didn't expect THIS answer. When Adam saw Cassius in the school hallways, he recognized him as being his first and only crush. He was an innocent 13 years old boy when he first saw and crushed on him, so, even if he would have approached him, he wouldn't have stood a chance, but now he's grown and has no drop of innocence left in him. "Keep that mouth of yours clean. It's a little dirty, don't you think?" I ask, and his smirk becomes slightly bigger. "Not yet, but I would love to get it dirty." His voice, even though it's a whisper, somehow, it's deep and husky, and his green eyes turn a shade darker as he lowers them until they land on my dick.