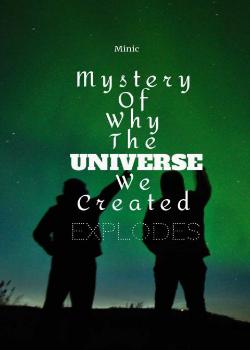 Mystery Of Why The Universe We Created Explodes

Drew and Kyle were best friends since they can remember. As being neighbors in a small town of Magnus Cove, they always spend their time together. Wherever they go, they always stick with each other, inseparable, they said. Drew, the older one of the two of them, invariably shows his protectiveness towards Kyle. Their closeness did something to Kyle. He took it more than just a friendly gesture. Pretty much more when he realized he fell in love with his best friend. That didn't sit well with him 'cause Drew was straight as an arrow. All the girls he had crushed on can prove that. He tried to stash it every time Drew shows affection and somehow it worked, not until Melissa entered the picture. The girl his best friend fell in love with. Drew was now spending more time with Melissa and Kyle didn't know how to change that. He craved Drew's attention, he just can't demand some time from him, he'll never do that. And if the two are being affectionate at Kyle's presence, he looked away, can't take the scene they're showing. How he wished it was him instead of Melissa. But this summer, he has a lot to worry about than his feeling towards Drew. Something unexpected happened that can change their whole life forever, especially Kyle. The summer they're both expecting something good and fun turns out not so good after all. Will their friendship remain the same when all those things will try to create havoc in the bond they have? They made a promise of growing up together. Will one of them cling to that promise? Or will the tight grip they held to that promise unfasten?