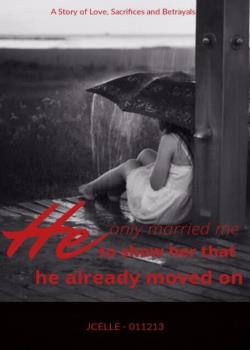 He has all the traits that you wished for your dream man to have. Power, money, perfection, handsomeness and a body like a Greek God. But he's inlove. He's inlove with her. For him, she was the completion of his dream, a perfect wife and a mother to be with his children. He would give her everything including his own life. He would sacrifice his world for her. But she left him. She betrayed him. She broke his heart into pieces. And he turned into a cold, heartless, rude and an arrogant billionaire, who would do everything to show her that she's no longer important into his life. Even though the truth is the opposite of what he is doing. His heart still aching for her. And that's when he met me. I applied as his Personal Assistant to fulfill my bucket list of dreams. To explore my life and experience everything. He offered me a deal. He asked me to marry him just to show his ex that he already moved on. * * * * * * * * * * * * * * * * "She's pregnant." He blurted out and i almost stumbled on where i am standing. I just gripped the backrest of the couch to support my weight. The pain creeping in my heart is unbearable but i managed to stay calm. "Wow! Congratulations!" I said faking my excitement as i remembered him saying... -cheating would not be the reason to break our marriage- of course i couldn't accuse him of this as 'cheating' because she was the real reason why we are pretending as a couple. He still love her. He's still inlove with her. And that's when i made the biggest decision in my life. Taking all my strength and a piece of my heart that still hanging on a thin rope... I left him. Taking also my biggest secret in me... that i've already fallen inlove with him. And somehow i learned a lesson; 'Loving someone who doesn't love you back isn't as hard as loving someone who still inlove with his ex and who only uses you to get her back again into his life..'