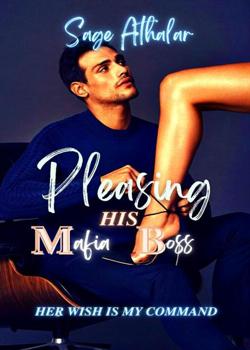 I couldn't see anything, I was blindfolded. I couldn't move my limbs, I was cuffed to the bed. I couldn't speak, I was gagged. She had me bound in more ways than one, and nothing else existed here but my desire to please her. My body was so attuned to hers that I felt her presence and then, I felt her touch. If it wasn't for the gag that prevented me from speaking, I would have begged for her to end my torture and give me the pleasure I badly craved. I was so hard, and my whole body quivered.

Logically, I knew I should be afraid because I had seen the same hands that touched me so intimately right now, take so many lives effortlessly. I knew the pain that her hands could give. Yet, I leaned into her touch because I also knew the indescribable pleasure that would be my reward. She had warned me that I would get addicted, but she had been wrong. Now, it was more than an addiction, I needed her touch like I needed to breathe.

"You've been good, pet, and good boys get rewards." She whispered against my skin and I felt my erection leak precum.

I was in a vulnerable position, but I didn't care. My Mistress would take care of me, that was a fact I was one hundred percent sure of, I only needed to trust her. So I went against logic and surrendered to her, because... Her Wish Is My Command.

Amandla walked through the dimly lit corridor, seething with a rage that could match the hottest furnace. She had been betrayed and blood would flow for it.

"We got your assistant at the airport. We also got her handler, the middle man between her and the real mastermind of all this. It seems that whoever hired her decided that she was a loose end that needed to be tied up and the man was sent to do the job and kill her. He had backup, two guys, one escaped but the other got a bullet to the head." Marquis spoke as she got to him.

"Gloves." She said and black leather gloves that matched her all black outfit was handed to her.

"Were you able to find the identity of the dead one?" She asked as she put on the gloves and flexed her fingers.

"He was a mercenary and we suspect the one that escaped is one too. They aren't allied with any of the other Mafia families, they were just goons for hire. Her handler is the only one that could lead us to the person or people behind it. Your assistant doesn't seem to know much, she just received money for the job so she did it."

"I will find out what we need from whichever one has the knowledge. The name of the handler?" She asked.

"He is known as Bosco, but his real name is Dante. He was a Petronelli soldier, very low in the food chain. He tried to get a better position by selling them out to their rivals, the Torres. They handed him back to the Petronellis to execute since he's one of theirs." He replied.

"At least they put their feud aside to handle rats the way they should be handled." she said.

"He escaped while he was being transported and disappeared after that."

"He doesn't have the connections to pull that kind of stunt. Whoever helped him must have wanted him to survive to pull off this Sheila Shenanigan." She said.

"Stupid is more like it. No one is to inform the Petronellis that their snitch is in my custody. Unlike the Torres, I won't be handing him over. I will deal with him as I see fit."

"As you wish." He almost felt sorry for their prisoners, especially Sheila, she should have known better. She had worked with them for a few years, had seen what was done to traitors, yet she had somehow thought she could get away with it.

"Hello Sheila." Amandla said as she walked into the room where the woman was tied to a chair, Bosco was in the same position beside her.

the gag in her mouth. Bosco was still unconscious beside Sheila, slightly bent over with his hair over his face.

"Remove the gag, and wake that one, this isn't a Hotel." She ordered and someone in the room moved immediately.

Bosco jolted with a gasp as ice-cold water was poured on him.

"You finally decided to join us your majesty."

His eyes were unfocused for a few seconds then he realised where he was.

He began to struggle to free himself and the chair squeaked as it scraped against the floor.

Muffled words came through his gagged mouth as his chair was held down so it would stop making grating sounds.

Amandla gestured for his gag to be removed when he finally stopped struggling.

"Let me go." He said and Amandla chuckled.

"That's really the first thing that came to your head and out of your mouth?" Amandla asked as she leaned on the wall and folded her arms.

"I'm not scared of you, you have no reason to keep me here." Even as he made that declaration, his eyes darted around looking for a possible way of escape.

"If you want a reason, you tried to kill my assistant." Amandla said and Sheila's eyes widened as she turned to look at the man.

"You don't honestly think you're important to whoever paid you to betray me, do you?" She asked Sheila before returning her attention to Bosco.

"And do you really think I need a reason to keep you here Bosco?" Amandla asked and he snorted.

"I was hired to off the bitch. She's not even important to you else she wouldn't be tied up here, so let me go." He said.

"You don't give the orders around here. And your attempted murder of Sheila is not the reason you're here and you know it."

"I don't know what you're talking about." He said nonchalantly, trying to feign a calm he didn't feel.

"If it's what you want, then I'll spell it out for you. First, you tried to snitch on the Petronellis, then you disappeared. Next, you got my assistant to work for you."

His eyes widened for a second before he schooled his features and donned his mask of nonchalance. It was too late though, she had gotten the reaction she wanted.

"Your disappearance was impressive, so either you're just too good or, you had help. The latter seems more likely, but the Petronellis efforts at locating you were less than impressive, so maybe you are too good." She paused and he smiled smugly

"Not good enough to escape my people though." She said.

"They just got lucky." He seethed.

"Maybe. Or maybe you got sloppy, they saw an opportunity and seized it. Now tell me, who hired you to hire my assistant to get information or whatever else she was paid to do before she got caught?"

"I know nothing. And you have nothing on me except the Petronelli incident, you don't even have the right to touch me. I belong to them, so by law, I should be handed over to them." He said.

"I am the law around here. Besides, the Torres did that once and how did it turn out?" Amandla asked and his reply was a shit-eating grin.

"Such pretty teeth." She tsked.

"It's a shame you're going to lose them soon. Strap him to the table." She ordered and he was moved while he struggled and cursed viciously.

When he lay spread-eagled, she walked to him.

"Whoever has been helping you, or should I say using you, knows better than to trust you with any information that's actually important so I won't bother asking anything related to that. But, you almost got away with something of mine. I know you haven't given your employer the information Sheila sold to you, you most definitely kept it somewhere you consider safe so you could finish her off and then hand it over. Where did you hide it?"