Romance A DEAL WITH THE DEVIL ( 365 days contract ) 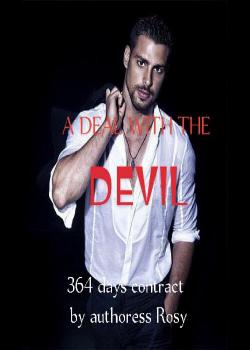 ☠A DEAL WITH THE DEVIL☠ 365 DAYS CONTRACT ❌ PROLOGUE Tags: hatred, revenge, bully, romance, secrets, and betrayal 🌟🌟🌟 A girl of about 19 years old could be seen running away with her friend, from a group of boys who were after them, it gets to a point where her friends couldn't take it anymore cos, he was getting tired Run Dion, faster, they are getting closer,” she said dragging her feet forward I can’t run any longer am getting tired, my legs hurt,” he replied as he slowed down a little Try Dion, we are almost close to the market and we will rest once we get there,” she said encouraging him You have to go without...... she did let him complete whatever he was saying before dragging him out of the place Her name is Melisa ford, a 19 years old college student who is more stubborn than stubbornness itself, her parents tried making her see that she's a woman and not a man, that she needs to change for the better tomorrow but she always says yes to them and tomorrow she will do the worst She has a best friend Dion Stone, who happens to be her partner in crime, they have been friends since childhood and they seem inseparable Oh no, I told you that we shouldn't have done that but you didn't listen now look how we are running like mad people,” Dion cried out as they rushed out of the place followed by the men Just shut up and follow my lead,” she said and Dion holds his mouth that instant Yes boss,” he muttered This way,” she said and run into a place that look more like a fighting ground Catcher,” one of the guys that were after they said and jumped on her, she tried to break free but his hold on her was very strong She was still struggling to break free when the guy suddenly drops dead on the floor That’s my boy, I know you will always find a way to help me,” she muttered thinking it was Dion She arranged her clothes; it was as if the time had stopped as she didn't hear the voice of anyone or anything Dion, have you suddenly gone mu....... the rest of it was stuck in her mouth when her eyes landed on the person who just saved her life She wished the ground will just open and swallow her, she instantly regrets not listening to Dion when he asked her not to cause trouble, she wishes those guys had taken them instead of him saving her He smirked dangerously when he saw the look on her face, he turned around and Dion gasped immediately he saw who it was THE DEVIL,” he mumbled Who is he⁉️ What happens when the two BFFs was forced to separate⁉️ What did they do that made those men be after them⁉️ You don’t want to miss this story trust me! A lot of things are going to happen here Grab your popcorn 🍿