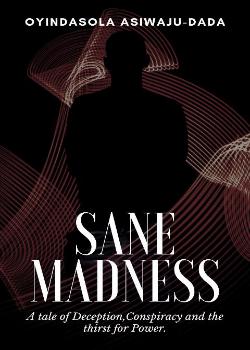 Temi did not die in a bang, she wasn't stabbed or gunned down, Temi did not get run over by an incoming car, heck, she had no serial killer after her. She was just in the wrong place, at the wrong time and on the wrong day. ***** Mide Royal was known for one thing; His brave and Efficient work in the police force. But he is asked to take up Temi Adeyemi's case, the last thing he thought was that he would be hunting down a psycothic killer that may know him a lot more than he'd like. Mide must navigate through a world of lies, secrets and hidden truths to uncover what happened that night, and why his gut feeling insists that the person currently behind bars is not Temi's murderer but what happens when the killer challenges Mide to a game of Sane Madness. one that might cost him his sanity.