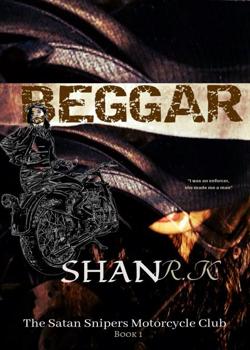 A Suspenseful Biker romance about a beggar and an Enforcer. I was on the streets until I wasn't. They took me, fed me, and clothed me. For a time I was happy until he came back. I had five years to accept his chains, my monster. He owned me until I met the Enforcer of The Satan Sniper's Motorcycle Club. His name was Zero.  He wasn't just an Enforcer. He was a stone-blooded killer. Beggar I've never known a day of being normal or having a hot plate of food to eat. I don't even know what it feels like to have a bath. The streets of Washington have been my home since the day I was born. As the years went on by, I learned to survive on these streets, I even learned to smile.  Zero I know I should let it rest, but I can't drop it. I need to know her name. My gut is riding me hard. My instincts are telling me it's important.  I'm the enforcer. If there's even a thread that she's a danger to my club I need to know. When Beggar saves Falon, she passes the biggest test of The Satan Snipers.  Taken as a prospect, Beggar can finally get the life she wanted. She gets more than she ever hoped to, a man's heart. But secrets from her past and the man in question set on uncovering the dark that plagues her threatens her new life.  Will she learn that the Enforcer of The Satan Snipers is more than able to handle anything, even the reason she calls herself Beggar? "When I was younger I was a beggar by circumstance, when I got older I remained a beggar by choice."